Purpose of Transition movement in Portugal

History of Transition movement in Portugal

According to the official website of the national hub, the Portuguese Transition movement began in 2009 supported by the creation of an online social network called Transição e Permacultura em Portugal (Transition and Permaculture in Portugal). In April 2010 a national colloquium, Transição para uma Economia e Cultura Pós-Carbono (Transition for a Post-Carbon Economy and Growth) took place in Pombal, and the first Portuguese initiatives registered on the Transition Network website that April (Parades) and May (Pombal).

The national hub itself, Transição Portugal, emerged from a series of meetings that took place between November 2010 and September 2013. It publishes a digital newsletter on a quarterly basis, runs regular Transition Trainings conducted by a team of four recognised Portuguese trainers.

Scope of Transition movement in Portugal

Two transition initiatives, however, started within academia in 2011 and went into hibernation also at the same time around 2013. UMinho in Transition was initiated by professors, students and staff and through implementing a food garden at Minho University. This initiative intended to promote research, cultural intervention, solidarity and biosustainability.[1].

TU-FCUL is a transition initiative that started at the Faculty of Sciences, University of Lisbon, at the end of 2010. Their goal was to facilitate the Transition by bringing a more systemic perspective into the faculty, new topics (such as Community-led initiatives, Integral Theory, Nature-Based Design, among others), new ways of doing (such as Dragon Dreaming and Open Space technology) and most of all, Be the Change we want to see in the world (initiating several local projects). This initiative transformed into a research theme on Integral Sustainability within a research group (CCIAM) from the Faculty, wrote several national and European projects applications on the role of CLIs on local transition, resilience and regeneration and ended up supporting the faculty role as ECOLISE co-founder in 2013. 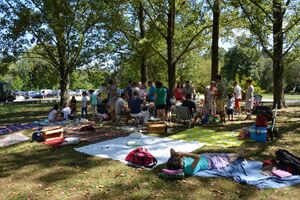 Famalicão em Transição is an association, formally instituted in 2016, while the informal group exists since 2011.

It consists of 20 active members and around 80 associated members. There are 6 working groups: education, environment, inner transition, communication, circular economy and headquarters space. All together the initiative is reaching out to approximately 2200 people.

Famalicão em Transição follows the principles and vision of the worldwide Transition Network movement. The mission is to contribute to awareness raising and the implementation of projects, to a life in harmony with nature and the community, to a healthier, more ecological and happier living with less consumption and waste generation, and shifting to low environmental impact.

Impacts of Transition movement in Portugal

Research on Transition movement in Portugal

A detailed study of the national Transition movement by researchers at several Portuguese universities took place within the COMPOLIS project during 2013 and 2014.[5]

Based on interviewees with 39 active participants in 14 Transition initiatives, researchers concluded that, despite an emphasis on community engagement in participants' stated motivation, and rhetorical commitment to inclusion and diversity, Transition initiatives tend to be dominated by quite a narrow range of highly educated people with previous history of involvement in environmental and/or social action. They suggest that, like the Transition movement as a whole, Portuguese initiatives would benefit from greater attention to issues of power and diversity within communities, and sustained use of more fully participatory methods to achieve wider engagement in the communities in which they work.[6]