Network for the Revival of Istria (Mreža za preporod Istre) was a grassroots initiative and a network in Slovenian Istria, active between 2014 and 2016. It mobilised rural communities in four Slovenian coastal municipalities to form the strategy of local development with a bottom-up approach. As a result, rural communities and organisations from all four municipalities of LAS Istre (Local Action Group of the Slovenian Istria) actively participated in 2015 LAG elections and in the reform in the LAG that followed in 2016. 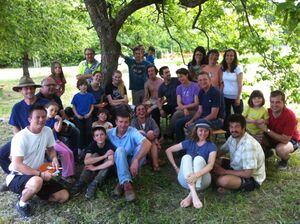 An excursion organised by Revival of Istria in 2015.

In 2014, a year before the beginning of the 6-year CLLD programme period (2015-2020), Dane Podmenik, an organic farmer from the region of Slovenian Istria started to mobilise active individual in rural areas across the region to co-create the strategy of local development through Eko-Humanitatis Foundation.

The idea came to life through the project Co-creating sustainable development of Dragonja region funded by EEA and Norway Grants. The initiative relied on the CLLD programme as a framework for activating local communities, focusing on sustainability and environmental protection.

Forming the Network was a response to the reality that local communities haven't networked across the region and haven't been involved in the creation of the regional development strategy thus far. [1]

The Network for the revival of Istria was officially formed on 9 March 2015 in Šmarje with the signatures of 11 local NGOs, mostly active in rural areas.

Over spring and summer months the network facilitated, in cooperation with Središče Rotunda, a transparent selection of two NGO representatives for the Board of LAG Istra, even before its establishment. Bojan Mevlja and Andrej Medved were selected.

Then the network focused on building a broader local partnership of active organizations and individuals in the region. The network became the basis for the creation of a coalition that brought together NGOs, farmers, entrepreneurs, individuals, representatives of the fishery (FLAG) and others.

On 18 September 2015, the coalition was unanimous at the founding assembly of LAG Istria. This caused a significant shift towards ensuring the work of the LAG came closer in line with the needs of the local communities and EU resources were made available to real priorities on the ground.

On the founding assembly of the governing body of the LAG, the Network participated as a concerted coalition of more than 60 active organisations, including 20 fishermen from the region (out of 100 total LAG founding members). The coalition brought to the table several objections to the proposed rules of procedure of the LAG Assembly to ensure transparency and efficient functioning of the LAG. All objections were supported by the majority. Andrej Medved was unanimously elected as the President of the LAG Istria and Mitja Petrič as Vice President. For the first time, LAG Istria was headed by an NGO representative. At the Assembly, many participants outside of the coalition expressed strong support for the Network.

The lead LAG partner in 2015 and 2016 stayed the same as in the years before, Regional Development Center Koper because no other organisation in the region had sufficient financial reserves, experience and staff to hold that role. However, in 2016 the LAG General Assembly made a vote of no confidence and a new lead LAG was selected, Središče Rotunda. That was the last key step in the transition to the new was of managing the LAG.

The first project of the network was sending an initiative Istria without GMOs to all four coastal municipal offices. The second project was a waste cleanup Let's Clean Dragonja river.

To form the network, meetings and workshops took place in many villages: Šmarje, Padna, Gračišče, Marezige, Sv. Peter, Pomjan, Strunjan for the sake of decentralisation and coming to the people instead of expecting them to always come to the town.

A poll was conducted among Istrians about their views on the potentials for regional development and environmental protection around Dragonja river and rural areas of Slovenian Istria showing there is a lot of interest but not much motivation and understanding how to approach regional development due to legal, bureaucratic obstacles, a feeling of disconnection in relatively dispersed local communities, week collaboration, economic dependency on urban centres etc. More than 60% of people were not aware of the existence of the LEADER/CLLD programme.

The three key topics that kept reoccurring on most of these events showed that local communities agree on priorities: (eco-)tourism, (organic) agriculture and environmental protection. These were, thus, made priorities in the regional strategic plan, submitted to the CLLD programme.

On 30 September 2015, the Network organised the 1st Istrian Rural Parliament, the first of such sort in Slovenia, with more than 100 participants. At the Rural Parliament, the strategy of regional development was fine-tuned and consolidated with contributions from all sectors of local society. The draft strategy was communicated to institutions on municipal and government level. 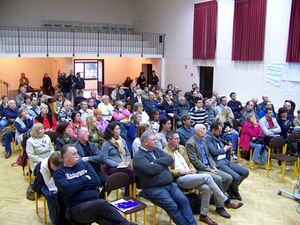 A festival called Lively Pomjan (Oživel Pomjan) started taking place in September as a side-effect of the Revival of Istria initiative. In 2019, it still attracted hundreds of people to taste the food of local producers and enjoy a rich cultural programme.

Another offshoot of the networking was the formation of the cooperative Zemlja in morje (Land and Sea), uniting a few eco-farmers from the region to market their products together.

The case of the formation of the LAG in Slovenian Istria has proven that local communities want to actively participate in the creation of regional strategic development, but they lack information, guidance, motivation, animation and navigation. When the core team of the Network for Revival of Istria came to the villages to present the CLLD programme and answer their questions, their interest increased. Their prior conviction was that the CLLD was too complex and bureaucratic to begin getting involved with it. With some guidance and assistance, local communities managed to join their voices and participate in LAG together.

Professional facilitation helped to keep the trust between the coordinators and the representatives of local communities.

One of the aims was only partially met. The Network wanted to assist regional organisations by connecting their project ideas and systematically nest them, creating joint projects that fit better the criteria for receiving the CLLD funds. The organisations with better administrative competence and higher self-initiative faired better while assistance to smaller local organisations was not adequate.