Let's Do It Slovenia 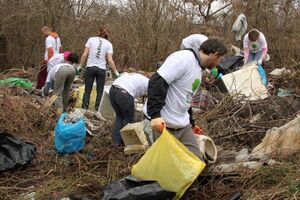 Members of Ecologists Without Borders on a cleanup in 2010.

Ecologists Without Borders Association is one of the leading Slovenian NGOs dedicated to improving the state of our environment — focusing on efficient resource use and active citizenship. Most of their activities deal with waste at its source, but not all are limited to Slovenia. They are an active member of Zero Waste Europe, Let's Do It World, Break Free From Plastic and other networks.[1]

Ecologists Without Borders Association was formed in March 2009 and six months later became the official organisation behind the Let's Clean Slovenia in One Day campaign, inspired by Let's Do It World. Today this is still known as the largest Wikipedia:Slovenian environmental volunteer project. It took place on 17 April 2010, uniting 270,000 volunteers (13.5% of the population of Slovenia). [2]

Purpose of Ecologists Without Borders

The mission of the organisation is activation, motivation and cooperation of individuals, communities, policy makers, industry, businesses and researchers in the area of the efficient use of natural resources with the aim to reduce costs, preserve energy and create new green jobs. It educates and builds opportunities for waste prevention, separate collection, recycling and composting of materials in waste.[1]

Six months into its existence, the organisation organised a huge campaign that resulted in the largest environmental volunteer action in Slovenia on 17 April 2010. After such a quick start, Ecologists Without Borders took up various other waste-related projects, and in 2012 joined the first World Cleanup initiative that was planned for 2012. To support the spread to other countries in the region, Ecologists Without Borders organised a conference in April 2011, attended by representatives from Albania, Bosnia and Hercegovina, Bulgaria, Kosovo, North Macedonia, Serbia, Croatia, Slovenia, Estonia, Austra and Latvia.[3] The Slovenian cleanup campaign in 2012 was a similar success to the one in 2010. Besides the cleanups, Ecologists Without Borders have organised many other projects and campaigns related to waste issues and have been maintaining the register of illegal dumpsites since 2010. This register was developed in collaboration with the Slovenian mapping service Geopedia. Since 2012, the focus of Ecologists Without Borders is on prevention measures and promotion of the Zero Waste philosophy.

Scope of Let's Do It Slovenia

Ecologists Without Borders are mostly active in Slovenia. In collaboration with Let's Do It World and Zero Waste, however, a few members of the organisation have been instrumental in supporting other countries in their campaigns and Zero Waste strategies. In Slovenia, Ecologists Without Borders have introduced Zero Waste programmes, contributed to better waste policies, worked with government and non-government institutions etc.

For the cleanup campaigns, the number of people involved in the coordination was around 50, while the broader coordination encompassed up to 3000. The NGO doesn't build membership, but works with some 30 active volunteers and interns.

The 2019 report[4] states that Ecologists Without Borders engaged in 9 projects and worked with 9 municipalities with Zero Waste strategies (covering 18% of the population), preventing at least 14,600 tons of mixed communal waste. There were 90 clothes exchanges attended by 4200 people. There were 1834 publication in the media in that year.

Impacts of Let's Do It Slovenia

Research on Let's Do It Slovenia

The first campaign in 2010 didn't go unnoticed and thus the organization received the Order of Merit of Slovenia in the same year.[5]