Economic impacts of the Transition movement

Compared to the ecological and social and cultural impacts, less respondents reported they had achieved some, or meaningful/significant impact across the economic impact categories. Specific Transition projects that focus on local economies that are not so well represented in the 2020 survey, include the REconomy[1] project, and Municipalities in Transition.[2]

Many economic impacts and projects of Transition were not 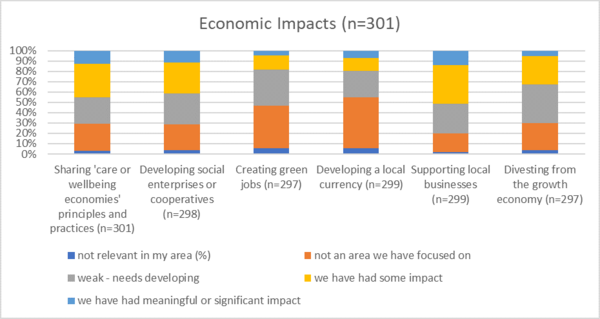 Whilst Transition group activities included economic impacts (see below), the need to attend to the economics of Transition itself was an important theme in the 2020 survey and discussion groups.

The need for financial support, for projects, start-ups and paid time, was strongly heard in the 2019 survey of British groups[3]. Respondents to the 2020 survey reflected that some of the challenges and tensions of scaling up their work focused on the need resources and capacity for core roles: “having enough time and energy to keep it all going!” (Transition Town Worthing, England), highlighting the difficulty of leveraging more time without paid positions, and the vulnerability of relying on voluntary work. Furthermore, some respondents highlighted the “tension between voluntary and paid work. Hubs are crucial to support the transition process and most of them don't have capacity”.

Suggested solutions included sustainable livelihoods and diverse income streams for Transition groups. This was evident from the 2020 Survey: “Identify activities that generate sufficient economic income to finance Transition activities in a sustainable way for the people involved in it” (Red de Transición, - España), and from the Transition US report: “Build our efforts into regenerative livelihoods, so that organisers don’t have to keep straining and draining personal reserves of time and energy to do Transition outside of earning a living, but instead as an integral part of it” and “Ideally, there would be a paid person at each Transition group”.

An as yet unfulfilled area of potential for the Transition movement globally is to develop practices and systems which enable Transition groups, hubs and members to thrive within a vibrant economy of wellbeing and care. In a few pockets of activity this has been achieved

Some survey respondents highlighted the potential of partnering with aligned approaches to economics, such as Doughnut economics and Doughnut Economics Action Labs[4].

Survey respondents also highlighted the challenges to regenerative economics, included vested interests in the growth economy at all scales. Locally this was illustrated by competition from local supermarkets, and nationally and internationally by the power of political and business lobbies, for example:

“I see 2 main challenges: 1) Economy plays with the wrong rules - As long as the true costs of production are payed by the public and not by the enterprises we as Transitioners can demonstrate that there could be another economy but we never ever will have the chance to realize it. 2) As long as more people are payed to destroy the earth according to the "wrong rules of the game" we don´t have a chance either” (Bonn im Wandel, Germany).

Transition groups reported many ways they had achieved economic impacts during COVID-19. Examples included supporting local businesses and trade, for example through using complementary currencies; running or keeping fresh produce markets open; and developing social innovations to link farmers, businesses and farms; and linking local businesses to home delivery services, for example in Valsamoggia, Bologna, Italy[5]. Some groups saw how their work with local businesses over time had made their community more resilient to COVID, as the example from São Paulo illustrates. Some examples from the Transition 2020 survey

“We offered a quota service to the BioMarket in order to keep it open” (San Lazzaro di Savena (Bologna) Italy)[6].

“Between lockdowns our local market (run by the Transition group) has been very well attended and a good meeting place for socialising” (Kings Langley, UK).

"I see that the way we organize and support local businesses has made the confrontation of Covid more lenient, in my community, the creation of common sense, and support for small businesses, was something very present, which even saved many businesses that ended up being embraced by people who kept asking, via whatssapp and delivery, so that these places would not close. In addition, this sense of community has led many to support and support the local elderly by shopping for them and helping each other throughout the quarantine" (São Paulo, Brazil).

"I have founded a cooperative to support regional small businesses (handicrafts, food, service providers) and farms. With this we build common networks that support each other! The cooperative initiates innovative processes and projects in this context - delivery platforms "Austria delivers", development of market systems "Total Regional", sustainable energy systems "Farm-Energy", organic agriculture and permaculture, humus development "Humus-Nectar". We had immense success with this, especially during the crisis, and we urgently need support and assistance!"[7] (Graz und Wien).

45% of Transition 2020 survey respondents reported some or meaningful or significant impact in this area. Some examples of care or wellbeing economies are:

“We have created our own platforms for regional small businesses and farms so that they can present themselves better and maintain access to customers. This is how the region is networked and informed! @ Austria delivers, @Steiermark delivers, @Wien delivers, @Weiz delivers @Gleisdorf delivers @Leibnitz delivers, .......... More than 10,000 companies are now using this! A web / internet shop has also been set up at Imago where producers can market their products without their own shop!"[8] Graz und Wien.

“a barter festival that has been held annually for twelve years, last year we integrated the festival with the assistance of 300 people and the previous year we managed to have around 2600 people from the countryside and the city, changing articles of different categories and contributing in the education to the conscious consumer, the valuation of the rurality, economic and tourist activation for the municipality”(Colombia).

41.2% of Transition 2020 survey respondents reported some or meaningful or significant impacts for developing social enterprises or cooperatives. The examples below demonstrate the social innovations that Transition groups have achieved.

“the development of our SoHuWi, the world's first humus economy based on solidarity. We build humus and do this in the long term and within the framework of a community that functions according to the principles of solidarity agriculture. And it works and it will continue for the next 20 years and, who knows, maybe beyond. And it is a model project and will initiate further initiatives of this kind. I build on it! And humus, living earth, is one of the most powerful CO2 stores and CO2 sinks"[10](Göttingen im Wandel, Germany).

“For effective implementation, we founded a cooperative 3 years ago that plans projects, integrates and motivates people to implement them, and to continue and develop them sustainably"[11] ( Graz und Wien, Austria).

"EcoFeira was one of the great achievements of Transition Granja and is increasingly valued in the region. Encouraging organic agriculture and local producers. The Exchange Market also helps to raise environmental awareness, to reuse instead of buying new ones" (Transition Granja Viana, Brazil).

"We have been supporting local organic small business farmers by building a once a month local market. Since we have very good organic farmers, we created a place for consumers and farmers have direct contact" (Japan).

18% of Transition 2020 survey respondents reported some or meaningful or significant impact in the theme of creating green jobs. One respondent reflected that: “we would like to create more green jobs, we thought our biggest project would do this - but it is slower to achieve this than we thought”. (Melbourne Area Transition, England).

19.7% of Transition survey respondents reported some or meaningful or significant impact in developing a local currency. The examples demonstrate that the impacts of some local currencies extend beyond economic impacts, by encouraging the sharing of ideas, and as an engagement tool to influence habits and practices.

“The creation of a local currency, the support to the organizations or groups with which transition works has been significant, especially in the transition initiative of Queretáro where a currency for children has even been formed with everything and what it implies. Regarding the products and services they develop as well as the series of products they make to exchange and sell at fairs, it seems to me of high impact since this information is acquired by girls from an early age and the knowledge is transmitted directly to the family. This initiative has led other schools and communities to follow suit to the point that there are already encounters between prosumer girls and boys. The individuals and families involved form a network that is interwoven with other networks at the local, national, Latin American and international levels. On the other hand, the creation of a social currency does not only imply the currency but also a series of changes in people's daily habits as well as the connection with networks of consumers and organic producers, green companies and many other activities related to prosumism” (Transicion México Hub).

Some local currencies have not had as much uptake due to a lack of capacity within the group:

“TTP has had a long-running experiment in a local currency. The local currency is still viable though not being used widely except among some loyal users at farmers markets and few small businesses. This is due to the lack of volunteers to continue to promote and demonstrate it, as well as more robust belief in it and promotion of it by the Credit Union which is its 'banker.' It remains one of those "experiments' that our times call for and still has potential” (Transition Town Peterborough, Canada).

51.5% of Transition 2020 survey respondents reported some or meaningful or significant impact in the theme of supporting local businesses. These included supporting and promoting local independent shops, encouraging cultural creatives and food producers to support local enterprises. Some groups also gave examples of connections with related organisations, such as ‘Totally Locally’[12].

"Between lockdowns our local market (run by the Transition group) has been very well attended and a good meeting place for socialising" (Kings Langley, UK).

Divesting from the growth economy

32% of survey respondents reported some or meaningful or significant impact in the theme of Divesting from the growth economy (e.g. attention to supply chains, big banks, fossil fuels etc). These included work on divestment from fossil fuel campaigns, creating new supply chains and defending free technologies.

In Sicily, respondents reported the "Creation of a supply chain, dissemination of new governance processes"