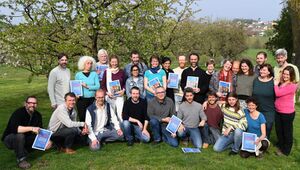 ECOLISE is the European Network of Community-led Initiatives on Climate Change and Sustainability is a coalition of national and international networks, as well as organisations that support a community-led transition to a resilient Europe.

ECOLISE aims to raise the profile of community-led action on sustainability and climate change. As a network of networks, it represents voices of thousands of bottom-up initiatives in Europe that take social, environmental and economic challenges seriously, acting on them in their professional and private domains. ECOLISE brings together various organisations, establishing a common, Europe-wide agenda and a platform for collective action. The unique stress of ECOLISE is on community-led since vital communities are crucial for resilient response to crises and for an effective transition to a sustainable Europe.

ECOLISE network was established to strengthen the collaboration and impact of sustainable community initiatives across Europe, represented particularly by the Permaculture Network, Global Ecovillage Network and Transition Network, but also by other organisations promoting sustainability and working with (local) communities. A key aim of ECOLISE is influencing European and national policy development and delivery to empower, enable and build upon the benefits of community-led action. To achieve such influencing, the network facilitates the creation and sharing of knowledge, maintains knowledge commons online libraries and provides relevant information infrastructure. All this serves to catalyse effective cooperation among member networks and other stakeholders.

ECOLISE network was established in 2014 at the initiative of Eamon O'Hara and Robert Hall and formally instituted at the first ECOLISE General Assembly in January 2015 in Freiburg, Germany. In the pre-forming period in 2013, 21 organisations stepped up as co-founders with the prominence of Ecovillage, Transition and Permaculture networks. In the first years after its formation, the work of the organisation was powered largely by volunteer work and a modest budget. From 2016 the increasing funding allowed for the employment of an increasing number of staff and collaboration in a number of EU funded projects.

ECOLISE works with its member organisations and partners as well as with EU institutions and organisations. Being a European network, ECOLISE is mostly active in Europe, but due to its key members' global identity, the impact is broader. In 2019, the operational ECOLISE strategy was created, consisting of four pillars, called Inspire, Enable, Learn and Advocate. These four pillars express as [Communities for Future (CfF)] action programme, launched in September 2020. CfF is the ECOLISE's flagship project, bringing more structure and connection to the already existing areas of work and building upon the European Day of Sustainable Communities (EDSC). EDSC is an annual event, taking place on the third Saturday in September. EDSC celebrates the local communities taking action for a more regenerative, just and inclusive Europe. On that day hundreds of communities and other groups across Europe organise events and ECOLISE provides support, inspires the wider public, draws the attention of policymakers to best practice solutions to social and environmental challenges.[1]

The members of ECOLISE include international networks of community-based initiatives such as the Transition Network, the Global Ecovillage Network, the Permaculture movement and ICLEI, the association of local governments for sustainability; national and regional networks; and other specialist bodies engaged in European-level research, training and communications to support community-led action on climate change and sustainability.

ECOLISE team and council consist of 25-30 people. Programmes and projects engage another 50-100 people, who each work with tens or even hundreds of people under the banner of ECOLISE projects. Between 2017 and 2020, the European Day of Sustainable Communities has engaged with hundreds of communities in 27 European countries.

In 2019, ECOLISE published the Status Report on Community-led Action on Sustainability and Climate Change in Europe [4]

In 2021, ECOLISE was still a young network, finding its position among many networks, organisations and institutions in European society.

The main vehicles for creating impact are ECOLISE projects. Since 2020, the flagship project is Communities for Future, a broad framework bringing together various related projects such as COMETS, Urban Arena, Ecovillage Transition in Action, European Day of Sustainable Communities etc. For the full list, please refer to ECOLISE projects.

Community-led initiatives expand on the ecological benefits of individual actions, scaling them across broader geographies to amplify impact. Despite the ecological footprint of ecovillages tending to constitute a mere fraction of national averages due to an amalgamation of infrastructural and behavioural reasons, participation of all EU residents in community-led initiatives would lead to emissions reductions of up to 70% when measured across the total EU area[4]. This would be owing to the promotion of renewable energy expansion at national scales and the adoption of lower energy-intensive lifestyles. It would also include increased uptake of low-carbon transportation, including active transport modes, and of more plant-based diets on a regular basis. Quantitative data extrapolation indicates that even an active participation rate of five percent in each EU member state's population would allow 85% of the EU's constituent countries to meet their emissions reduction targets[4]. As more private corporations are obliged to emerge from addictions to fossil fuels, the ecological impacts of these actions will likely have a magnifying effect across the different communities that comprise society on each habitable continent.

Evidence indicates that significant impacts of community-led initiatives in the critical areas of sustainability, economic and climate emergency policy design would reshape the social impacts of each constituent member of the EU[4]. The potential for such impacts may be vastly strengthened when give appropriate support, particularly through the expansion of qualitative outcome monitoring and feedback within the policymaking teams of each central bank directing regulation in EU states. This can be attributed to the long-neglected importance of mental health and well-being as a measurable impact of policy decisions made by every level of government. Qualitative indicators, including the formation and nurturing of interpersonal relationships, group dynamics within communities and the subjective experiences of participants, are crucial components of a just transition, as is acknowledged in the European Green Deal's references to the need for a just transition. Formal research underscores the positive social benefits of participation in community-led initiatives, including increased social capital, a boost to civic participation through volunteering and mentorship, and smoother transitions to inclusion across a wide range of peoples without treating difference as an obstacle to amity.

Economic benefits of community-led initiatives include creation of both direct and indirect employment, along with a range of broader benefits, both tangible and intangible to local economies. Politically, they employ various sophisticated methods of inclusive governance that could potentially constitute the foundation of wider direct and participatory democracy[4]. This may include piloting and feeding back to smaller-scale universal basic income support trials across different geographies, which may form the basis of a wider rollout of wealth partaking programs through direct transfer of cash. Fostering trust in these programs would necessitate long term commitments to the disestablishment of the premise that an individual is only worth their contribution to a growth mindset, which, in turn, calls for a transformation of the political environment into a more participatory space where everyone feels safe and welcomed. If realised, this may exist in tandem with existing hierarchical structures, as has been viewed in the Swiss and Icelandic contexts, before eventually replacing legacy structures that have perpetuated the growing gap between those who control more economic capital and those who have none of this. These governmental structures warrant review and restructuring in favour of decentralised administrative teams, owing to the lack of accountability and transparency that has caused existing structural flaws to be exposed with increasing frequency.

Most community-led initiatives have been active in areas covered by the UN's Sustainable Development Goals, and the Millennium Development Goals before them, since the start of the 2000s. Specific CLIs have adopted the framework used by the SDGs to evaluate their work and to link it with wider national initiatives intending to act sustainably, with the goal of fostering resilience. The work of CLIs directly contributes to 16 out of the 17 goals (the sole outlier being life in water, which is impacted by indirect outcomes of dietary, lifestyle and consumption choices). This journey of contributions contradicts the expectation that unbridled economic growth must be considered an outcome of and precondition for progress in meeting the targets set by the SDGs. In fact, most CLIs successfully address the SDGs through strategies that explicitly and implicitly decouple well-being from material prosperity[4].