Contributions of community-led initiatives to reductions in carbon emissions

Although research on contributions of community-led initiatives to emissions reductions is patchy, it shows great realised and potential contributions to climate change mitigation. While numerical figures are impressive, operating within holistic frameworks that link decarbonisation with wider social, environmental and economic goals means the actual potential of community-led action for climate mitigation goes far beyond this, and provides new potential perspectives upon and trajectories towards low carbon and sustainable societies.

There are many different views on the nature and scope of potential contributions of community-led initiatives to climate change mitigation. Various sources have highlighted the great potential of community action as a source of new visions, methods and knowledge for low carbon transitions.[1][2] A report released by the German Advisory Council on Global Change in the run-up to the Paris Agreement suggested that implementation would need to follow a dual strategy combining multilateral action on the part of states with active citizen engagement in relevant areas within an overall responsibility architecture in which the two are complementary.[3] Other research has highlighted the role of community action to come up with solutions that are locally legitimate and in doing so to help empower communities, expanding the scope of possible action at that level.[4] Community-scale carbon reduction can be both an enabler of action, and raise public awareness of the need and possibility for action on sustainability more generally, but when explored to its fullest potential can become a source of conflict with wider systems that can not easily accommodate the structural changes required.[5] This is part of the transformative potential of CLIs, which can provide routes out of lock-ins and path dependencies in wider systems with deeply in-built dependencies (physical, institutional and political) on fossil fuel use.[6]. This allows CLIs to be, potentially, more effective than government-led programmes, particularly in stimulating changes in individual and household behaviours, offering solutions that are likely to be more locally appropriate, participatory and inclusive, as well as provide enhanced benefits, for example through local ownership of low carbon infrastructures and transition processes.[7] When activated to its full potential, community-led action for climate change mitigation is not a delivery mechanism for centralised agendas, but a broadening of debate to include a far broader range of perspectives, views and agendas, many of these challenging established premises of sustainability governance.[8]

The most wide-ranging and systematic quantitative assessment to date of the realised and potential contributions of CLIs to climate change mitigation was conducted in TESS (Towards European Societal Sustainability), an EU funded research project that finished in 2016. Based on case study research on the social, political, economic, technological and environmental impacts of 63 CLIs in six European countries (Spain, Italy, Romania, Germany, Scotland and Finland), TESS calculated carbon emissions savings against national baselines in each country.[9]

In accordance with protocols for accounting for GHG emissions developed elsewhere,[10] the TESS project methodology followed six principles: relevance of data, methods and assumptions; completeness of information used, consistency in methodology, data choice, criteria and assumptions; transparency of methods, accuracy of calculations and conservatism (preference to underestimate rather than overestimate emissions savings.[9]

Inital mapping by snowball sampling identified 618 CLIs in the reearch areas, 320 of which fulfilled all the eligibility criteria. Of these, TESS selected 62 for in-depth case study research.[11] Each case study included a calculation of greenhouse gas emissions, compared with a baseline figure based on national per capita average emissions in the domain/s in question. This provides an estimate of the emissions avoided by each CLI, based on average consumption levels in each country, rather than a direct calculation.[9]

The key activities of case study CLIs within the four main domains assessed were as follows (summarised in Table 1 below): 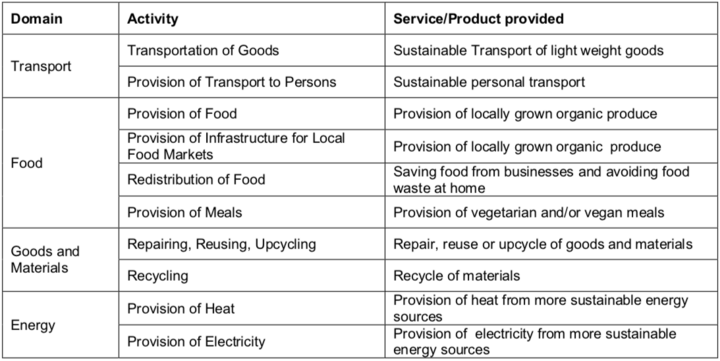 Results indicated that CLIs achieve the highest levels of GHG emissions through heat and electricity generation, personal transport and promoting vegan and vegetarian diets.[12]. As might be expected, emissions reductions in the energy domain depend both on the renewable technologies used by CLIs and existing national energy mixes: the same renewable energy technology would have higher mitigation potential in a country with a low proportion of renewables in the national mix. Similar applies in the transportation sector; for example, the mitigation potential of electric vehicles is low if the national electricity supply has a low proportion of renewables, but this can change if renewables later grow in importance. In the food domain, reslts suggested that dietary choice was more important than provenance: providing vegan or vegetarian meals with less animal products has far more impact on emissions than providing locally-produced organic food. Researchers also found that many CLIs are less preoccupied with emissions reductions directly are mainly engaged with building and strengthening local communities and reconnecting with nature within urban contexts.[12]

Considering Indicator 1, most activities in all domains showed significant percentage reductions in emissions compared with baseline figures, ranging from 20.8% for “Provision of Infrastructure for Local Food Markets” to 100% for “Repairing, Reusing, Upcycling”.

In relation to Indicator 2, absolute total reductions, some headline figures are as follows: 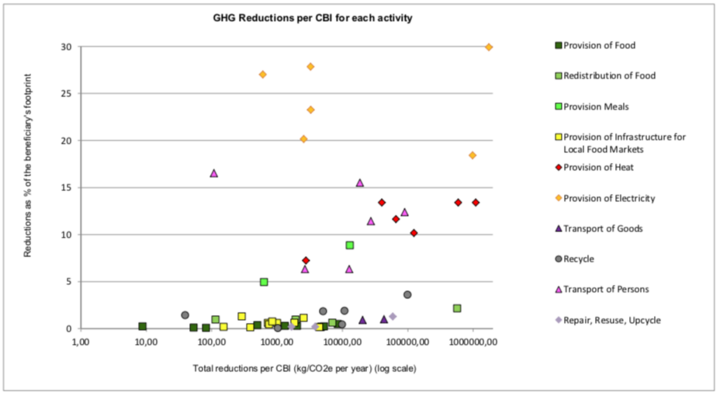 Figure 1. Absolute emissions reductions and reductions as percentage of beneficiaries’ carbon footprint. Note that the total reductions are shown on a logarithmic scale. Source:[9] 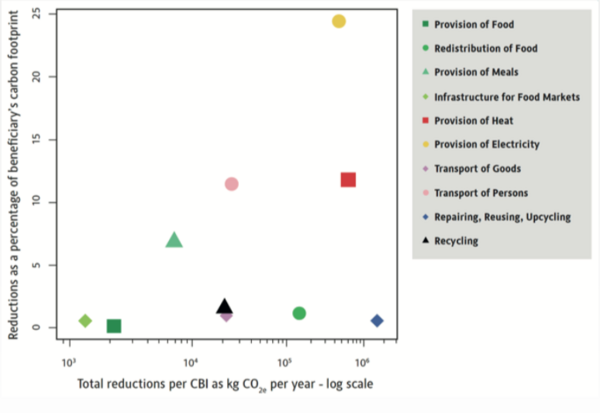 Figure 2. Absolute emissions reductions and reductions as a percentage of the beneficiaries' carbon footprint achieved by CLIs, by activity. Source:[12]

Extrapolating from the overall results, TESS researchers calculated the following potential contributions to climate change mitigation from the activities with the highest proportionate impacts:

A 2017 study reviewed 16 scientific publications that collectively assessed the ecological and/or carbon footprint of 23 ecovillages and cohousing initiatives. Results showed that in cases where ecovillages whose carbon footprints have been measured, these are an average of 35 per cent lower than national averages. The most spectacular case was that of Sieben Linden ecovillage in Germany, whose carbon footprint was in 2004 reported to be only 27 per cent of the German average.[13] A 2018 synthesis of findings from research on ecovillages around the world shows a number of activities that promote emissions reductions or carbon sequestration. These measures include preservation, regeneration and creation of natural habitats; promotion of nature-based and energy-efficient infrastructures; foster less, small and more shared infrastructures and goods; nurture circular economy and short water and food-waste cycles; and promotion of healthy lifestyles and sustainable commuting.[14]

The Transition Streets project conducted by Transition Town Totnes, supported residents in 468 households to work together as groups of neighbours to implement practical measures to save energy, carbon emissions and money, through personal behaviour change, supported household energy efficiency measures, and, where appropriate, installation of rooftop solar PV. Participating households achieved average carbon savings of 1.3 tonnes per year; those who installed PV saved an additional 0.4 to 0.7 tonnes per year. Over the first year of the project as a whole, participating households are estimated to have saved a total of 608 tonnes of carbon, and reduction in energy demand of 1.5 million kWh, around 14 per cent of average household energy use.[16] Estimates from the UK have suggested that low carbon community groups can achieve emissions reductions of up to 32 per cent in one year, and households within them reductions of around ten per cent.[17]

Although figures on carbon sequestration are, to our knowledge, rarely available, many CLIs engage in regenerative activities that restore soils and enhance biodiversity, known in other contexts such as indigenous land management and smallholder agroecology to have significant benefits in terms of carbon sequestration.

In a survey of 29 showcase ecovillages worldwide by the Global Ecovillage Network, almost all respondents reported that they actively work to restore degraded ecosystems, the majority indicating that this is a significant area of their work. Ninety per cent of respondents reported that they actively work to sequester carbon in soil or biomass, over a third dedicating substantial effort to these activities. Reported techniques include regenerative agriculture, afforestation, use of clean cookstoves, farmland restoration, water saving, composting, farmland irrigation and creation of biochar.[18] A review of ecovillage research worldwide presented similar findings, reported activities directed towards carbon sequestration such as preservation, regeneration and creation of natural habitats and promotion of nature-based and energy-efficient infrastructures.[19]

The EU-funded (FP7) project PATHWAYS modelled two alternative future large-scale transition pathways for humanity, one based on technological substitution, the other involving broader regime change. Both low-carbon transition pathways differ in the kind of actors involved, degree of radicalism of green niche innovation and the number of socio-technical dimensions involved:[20].

The main results from the modelling exercise conducted in PATHWAYS were as follows:[20]

The key overall finding is that the regime change transition pathway is initially slower but has greater and more persisent long-term impact on carbon emissions reduction.

Social acceptance is at the core of community-led initiatives' work: the public is not just an end-user that CLIs seek to manipulate, but a full participant in and co-creator of the local sustainability pathway. Several instruments to foster social acceptance are mentioned by a joint report of the PATHWAYS, TESS and ARTS European projects:[20]

In order to assess the role of community-led initiatives (CLIs) in low carbon transition pathways, the TESS research project used data on the contributions of community-led initiatives to reductions in carbon emissions to model two scenarios for emissions in Europe: one with little engagement of citizens and community initiatives (Low CLI scenario) one in which all European citizens would be directly or indirectly involved in or interacting with at least one CLI (High CLI scenario).[21]

The low CLI scenario, which the researchers considered realistic, assumed that by 2016, five per cent of the population in each EU country would be involved directly or indirectly with a CLI, with a third of these being active members. Considering the documented average carbon emissions reductions achieved by CLIs, country population data and the EU 2020 strategy (aiming to achieve 20 per cent reductions in GHG in all the domains studied in the TESS project: food/agriculture, waste, energy and transport) it was possible to estimate that under this scenarion the 2020 targets would be achieved in almost 85% of the EU-28 countries would meet the target of reducing GHG emissions by 20% by 2020.[21]

In the High CLI scenario, which the researchers considered unrealistic, by 2016 all European citizens would be directly or indirectly engaged with CLIs (a third of the total population being active members). Under this scenario, GHG emissions reductions over the EU-28 as a whole would total around 73 per cent, although the 2020 target would not be achieved in all countries via this bottom-up approach alone. Bpth scenarios show further potential reductions in carbon footprints if CLIs and their beneficiaries are able focus their efforts on the most effective activities.[21]