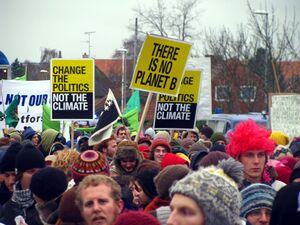 Climate change protest at COP15 in Copenhagen in 2009.

Climate change has become ubiquitous in public debates globally and both scientific evidence and everyday experience has convinced even the most ardent skeptics that human activity does have an effect on global climate. After decades of pressure from the public, political institutions adopted a global strategic response to climate change in the Paris Agreement of 2015. Meantime, community-led initiatives had taken their own steps to explore positive responses to climate change, which can be an important part of global mitigation and adaptation efforts.

In the third decade of the 21st century, climate change strongly shapes global politics and the economy. The problem is far from marginal, it raises concerns about the mere survival of the human civilisation as we know it. Community-led initiatives are often not reacting to these concerns, but rather with positive action that improves the quality of life where climate change adaptation and mitigation are practical side effects.

Community-led initiatives were taking action on climate change long before it was recognised as a global issue, and many have adopted creating positive responses to climate change and innovative mitigation pathways as core aims.