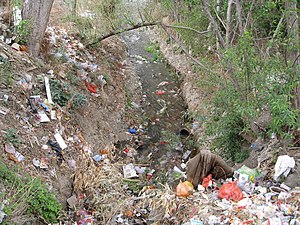 World Cleanup Day is a campaign started by Let's Do It! World global civic movement. It has developped around the idea of mobilising large numbers of people for one-day nation-wide cleanups to remove illegally dumped waste. The model was pioneered in Estonia on 4 May 2008 with their nation-wide cleanup called Let's do it! (in Estonian: "Teeme Ära!") engaging 50000 people or 4% of their population, cleaning up 10000 tons of waste in one day.[1] Over a decade, the movement has spread to practically all countries of the world and mobilised millions of people to participate in cleanups. From the beginning in 2007, until 2020 the movement has spread from Estonia to over 180 countries and engaged more than 21 million volunteers.

Global problems related to waste are immense and tackling them goes beyond governments and institutions. Massive global citizens' engagement is what World Cleanup Day aims for and the slogan Let's do it! summarises the urgency, self-initiative and cooperation necessary to address the problem. As organisers say on their official website: "Let’s Do It World has never been purely about cleaning up trash. Our vision is a clean and healthy waste free planet. We tackle the environmental challenges related to the mismanaged solid waste crisis by mobilizing millions of positive-minded people into coordinated local and global actions."[2] And also: "World Cleanup Day harnesses the power of people around the world to achieve incredible things by joining together. Its beauty lies in cooperation and collaboration: building bridges between disparate communities, and including all levels of society – from citizens to business, to government."

History of Let's do it! World

The movement started at an informal meeting of friends eager to do something to solve the problem of illegal waste dumping in Estonian forests and littering in towns. As they were pondering how to organise a nation wide cleanup, one of them, Rainer Nolvak, said: "Yes, we'll clean Estonia, but we'll do it in one day!" This triggered a series of meetings and leading to the formation of a team that held the campaign and finally, on 4 May 2008 the cleanup took place. The story spread to other countries and the movement rapidly gained momentum, reaching 90 countries by 2012 and 180 countries by 2018. The core team in Estonia with varying degrees of cooperation of colleagues from other countries had navigated the development of the movement over the years, supporting national teams with annual conferences, courses, academies, promo materials, graphic design, know-how, training etc. Since 2013, the connection with Zero Waste movement grew and in the later years with some other movements too, such as Earth Day, Greenpeace, The Ocean Cleanup etc. 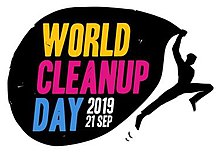 From 2018 on, a more global structure has developed with membership and a democratic process held by the global network itself, establishing its own decision making structures. The team in Estonia has split into two parts, one supporting the global network of cleanups under the identity of World Cleanup Day, and the Let's Do It Foundation started focusing on the newly formed Keep It Clean Plan, based on the principles of the circular economy, and embedding Zero Waste practices.[3]

World Cleanup Day aims to raise awareness of the mismanaged waste crisis by mobilizing all spheres of society to participate in cleanup actions. Individuals, governments, corporations and organisations are all encouraged to take part in cleanups and to find solutions to tackle mismanaged waste. There are numerous organizations that facilitate and host World Cleanup Day events globally. Like Earth Day, World Cleanup Day is non-partisan, apolitical, and is not affiliated with any national or global political party or discrete ideology.[6]

Around the world, teams in 180 countries have been involved in World Cleanup Day.